The greatest attraction of Puri is the world famous temple of Jagannatha. It is known by many , names, viz., the Puri temple, the Srimandira, the Bada Deu1a or simply, the Jagannatha temple.The temple of Jagannatha is one of the tallest monuments in the entire. sub-continent of India and its height is about 214 feet from the ground (road) level. It stands on a 'raised platform of stone, measuring about ten acres. It. is located in the hear! of the town and presents an imposing sight. The temple is bounded by two compound walls, the outer one known as Meghanada Pracira & the inner one known as Kurma Pracira. The present temple was built in the 12th century A.D. The temple structure is full of excellent carvings and lovely pieces of sculpture and is a fine specimen of Kalinga style of architecture. It is now maintained by the Archaeological Survey of India. Only orthodox Hindus are allowed to enter into the Temple. But the others can see portions of the enclosure from the top of the Emar Matha building, located near the east facing gate of the temple. 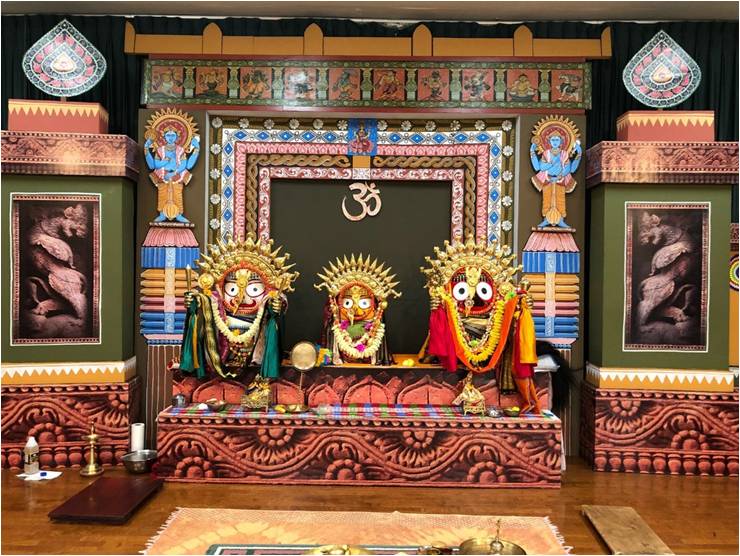 The largest crowd in Puri is seen during the Car Festival of Jagannatha which takes place every year some time in June-July. Jagannatha of Puri is strikingly different from all other deities worshipped by the entire Hindu world, mainly for the reason that Jagannatha represents all the gods and goddesses known to the entire Hindu world, either directly or indirectly. He is considered to be the highest object of worship by the followers of all the religious cults that come within the purview of Hinduism. For example, he is Siva for a Saivite, Ganapati for a Ganapatya, Kalika for a Sakta and so on and so forth. This kind of integration of religious cults and creeds belonging to Hinduism is not to be seen anywhere else.

Jagannatha represents an integration of all important Hindu cultures which flourished in India, namely, the Vedic, the Puranic, the Tantric, the Smarta and the Vaisnava, along with Jainism, Buddhism and that of the aboriginal tribes. The Vaisnavas of all schools, i.e., Ramanuja, Nimbarka, Caitanya or Mlidhva Goudiya, Radha Vallabhl, Atibadi Odisi - all have great faith in Jagannatha. The Mahaprasada (the offerings to the deities in the Puri temple) is a wonder of the Hindu world in as much as it is free from any kind of discrimination pertaining to the castes of India. Persons of all castes do partake Mahaprasada from the same plate without the least hesitation.

The main temple in Puri located on a gigantic raised platform. believed to be the base of a small hill known as Nilagiri or Blue hill is surrounded by about 30 other temples dedicated to various gods and goddesses of the Hindu pantheon. The kitchen of the Puri temple evokes a sense of wonder in any body from any portion of the world, who come to know of it. Within a short notice of a few hours, the temple can lavishly feed with first-class boiled rice & dishes of different tastes to thousands of people at a time. It is perhaps the biggest hotel of the world.

Since the days of first Sankaracarya who visited Puri perhaps by 810 A.D. and founded the govardhana Matha, Puri has gained special significance as one of the four dhamas of India. It is the eastern dhama and one of the four Sankaracaryas of lndia stays here.It is believed that, there were 752 Mathas i.e., religious endowments, constituting institutions for the study and propagation of religious creeds in Puri. But now, about a dozen of them deserve mention.