The festivals of the temple draw huge crowds not only from Odisha but also from other states of India. The festivals are, no doubt, occasions of great religious experience and devotional fervour but they are also occasions for trade, industry, commerce and business activities in Puri.

A festival in this connection is known as a 'Yatra', which simply means a visit. Some of the most important festivals are as follows:

This festival takes place in the month of Vaisakha and continues for 21 days. But technically speaking, it is a festival of long 42 days.The rites observed on the other 21 days are simple and less significant. In the first half period of 21 days, the representative images of the god are taken in a procession to the famous tank called Narendra Pokhari. They are taken round the tiny lake in beautifully decorated and illuminated boats twice each day. Thousands of people enjoy the festival with great delight. 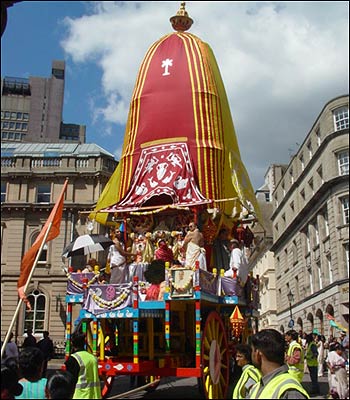 This festival takes place in the full moon day in the month of Jyestha, popularly known as the Deva Snana Purnima. This - is the first occasion in the course of a year when the wooden images of the three principal deities of the Puri temple, are brought out of the sanctum sanctorum in a procession and placed on the Snana Vedi . (described earlier) and are bathed with 108 pitchers of water. The usual daily rituals continue thereafter in the Snana Vedi. On this occasion Jagannatha and Balabhadra are dressed like Ganesa with the head of an elephant. From the Deva Snana Purnima till the second day of bright Asadha, the deities are not to be seen on the 'Ratnavedi' in the sanctum. They are worshipped secretly. Preparations for the Car Festival would be in progress and the deities would be seen only for a few hours before they are taken out of the temple to participate in the Car Festival.

The Ratha Yatra of Jagannatha is commonly known as Car Festival. It is also known as Gundicha Yatra. According to the tradition current in Odisha, Gundicha was the name of the queen of Indradyumna, the legendary builder of the first temple. As Gundicha had initiated this festival, it is known after her name.This festival of international fame takes place in the month of Asadha (June - July) every year. It is a nine-day festival, when the deities are taken to the Gundicha temple located at a distance of about 3 kms. from the main temple along the Grand Road in three gorgeously decorated chariots, specially made for each of the three deities. Normally, the chariots reach the destination (the Gundicha temple) by the evening on the first day of the festival and on the ninth day, the deities are brought back to the main temple on the same chariots. 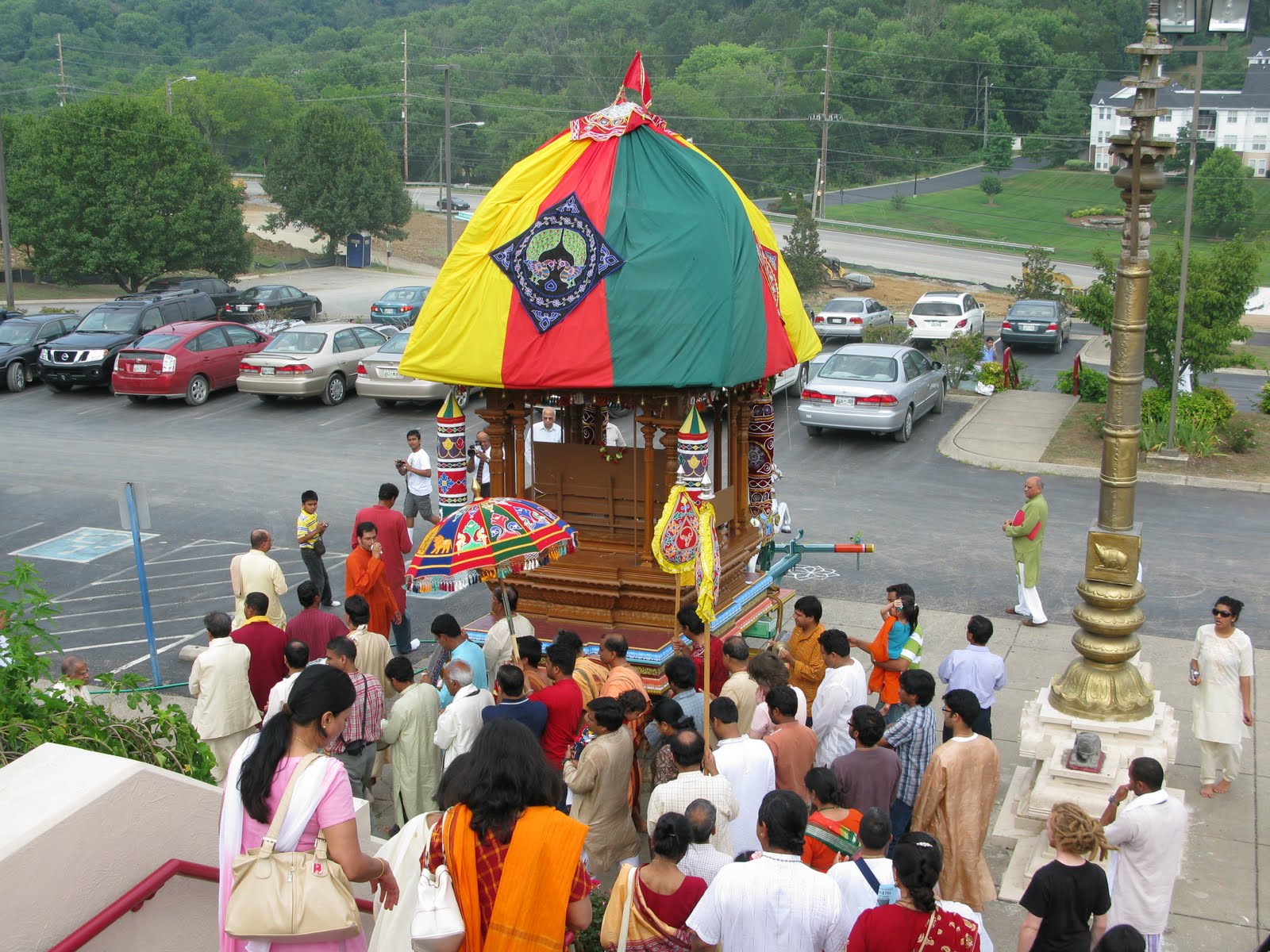 Thus, the deities practically spend full seven-days in the Gundicha temple. The return journey is called Bahuda Yatra and is performed on the same manner ,as Ratha Yatra.Certain other religious rites are performed on the chariots on that day including special dressing of the deities after which the deities are taken back to .the sanctum sanctoram. Logs of wood for the chariots are obtained from the forests of Dasapalla located at a distance of about 200 kms. from Puri The chariots are dismantled after the festival is over. The special names of these three chariots are as follows : (i) Jagannatha - Nandighosa,'(ii) Balabhadra Taladhvaja and (iii) Subhadra - Devadalana. The colour of the fabrics used to decorate the chariots are yellow, green and black respectively, mixed with red. The order of movement of the chariots from the temple gate towards the Gundica temple are (a) Balabhadra, (b) Subhadra and lastly, (c) Jagannatha. The deities are taken from the temple to the chariots in a swinging manner, which is locally called Pahandi. They are made to swing forward and backward in the process of which there is a little forward movement in each effort. After the deities are seated on their respective chariots, the Raja of Puri sweeps the floor of the chariots (locally called Chera Pahanra) and this is a great attraction during the Ratha Yatra. This signifies that even the highest sovereign power of the country is only a servant , before the God. After the sweeping ceremony is over, the charioteers are seated on the respective chariots, the horses (four in each chariot) are tied and the ropes (usually four in each chariot) are fitted. A huge log is used as the break of each chariot. Then the people are allowed to pull the chariots in .the order mentioned earlier, irrespective of caste, creed, sect, religion and sex distinctions. This liberty indicates that the god is equal for every person on earth and grants equal opportunity to all. This festival also signifies that, the deities desire to come down to the level of the common people for some time and move with them. It is said that Gundica temple was the place where Jagannatha had his first manifestation in the present form and therefore, it is the birth place of Jagannatha.

This festival takes place in the month of Asadha, when the deities are still in their chariots in the Lions Gate after the Return Car Festival. On this occasion, the images of Vasudeva, Bhubanesvari and Narayana are taken to the chariots. After some rites are performed there, these images are taken to the 'chamber of slumber' for enjoying complete rest for four months.

This festival takes place on the day of Karkata Sankranti. Special rites are performed on. this occasion.

This festival takes place in the month of Bhadra. The deities enjoying sleep change sides on this day.

This festival takes place in the month of Phalguna. The representative Deities are taken in a procession to a dias called Dolavedi located outside the main temple and special rituals are performed.

This festival falls in the month of Caitra. On this day, the deities pay a visit to the celebrated garden of Jagannatha Vallabha Matha, where they pick up the tender leaves of the Dayana plant un-noticed by anybody and put them on.

This festival falls in the month of Pausa. The deities are specially dressed on this occasion. Boiled rice mixed with candy and the juice of some fruits is offered to the deities. This festival has some agricultural significance.

This festival falls on the full moon day of the month of Pausa and deities put on royal dress on this occasion.

This festival falls in the month of Vaisakha, when special rites are performed.

Apart from these important festivals, there are about 50 more festivals that are observed with great enthusiasm in an atmosphere of profound religious fervour. Some of these are :